Green cover has increased in Kalasatama

SYKE researchers in the SMARTer Greener Cities project made in-depth analyses of the vegetation structure and green space in Kalasatama using the Helsinki city GIS datasets and aerial images, land cover data from HSY* and making several field visits to the study area. “Analyzing changes in the vegetation structure at neighborhood level needs careful checking in the field despite we had all the available updated data and aerial images” commented SYKE researcher Elina Nyberg who made the spatial analyses. We noticed that especially shrubs and low vegetation have increased in the past two years as the Kalasatama park has developed and vegetation has been planted on the newly built yards.

Kalasatama is a fast-growing new city district built on a former harbor area at the heart of the city and it has been launched as “Smart Kalasatama”. Over 2000 new residents moved to the area in 2019. Smartness is not just about technological solutions, but it’s also about developing sustainable and restorative environments that enhance the wellbeing of residents. Local nature plays a crucial role in this aspect especially as there will be 25000 residents in Kalasatama by 2030.

What will the future green spaces look like in Kalasatama?

Due to the history of Kalasatama as a former harbor area there is no remnant nature (e.g. forests) left in the neighborhood and the loss of large green areas is substituted by connecting residents to Mustikkamaa island with a pedestrian bridge, Isoisänsilta. Novel green spaces such as human-constructed parks, green roofs and closed block yards brings nature back to Kalasatama. Yards are mainly built on decks and often limited space for vegetation. Currently novel green spaces make up 32 % of all vegetative areas.

Additionally, there will be a seashore park Hermanni, a current ruderal area and a hybrid green space, which will be further developed around 2030-2036. The ruderal site makes up for 23 % of all vegetative areas in Kalasatama and it is an ecologically important bird site. For outdoor recreation, the residents of Kalasatama are heavily dependent on Mustikkamaa island. Mustikkamaa offers residents the only remnant green spaces and accounts for 45 % of all vegetation in the study site.

What is remnant, hybrid and novel green space? 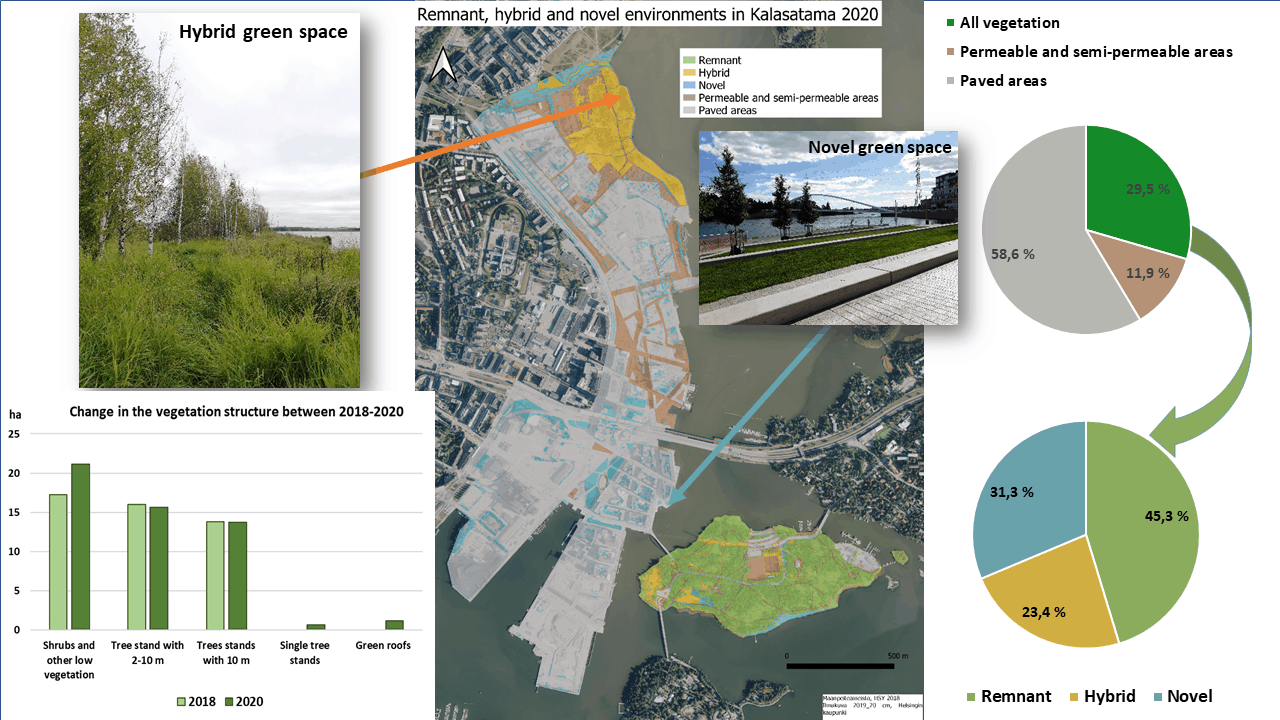