Fundamentally, the liveability of our cities depends on functioning ecosystems, within as well as outside the cities themselves. These we rely on for meeting demands for such benefits as urban air temperature cooling, improved health and wellbeing though outdoors recreation and socializing, stormwater absorption, drinking water supply, and mitigation of extreme weather events. However, such ecosystem services are not simply a range of benefits generated by functioning ecosystems but rather are co-produced by people and ecosystems, emphasizing the need for an integrated approach to understanding their production. The city prominently features humans as drivers of and responders to urban system dynamics along with nonhuman species and other system components. Notably, urban dynamics are influenced by factors such as values, aspirations, power relations, lifestyle and livelihood arrangements, thick formal and informal social institutions, and economic and political processes, among many other social attributes. Human action alters ecosystem support not only locally and regionally but also globally. Increases in connectivity, speed, and scale may enhance the capacity of societies to learn from, and adapt to and transform with, changing circumstances. However, if urbanization operates as if disconnected from the biosphere it may undermine the capacity of the life-supporting ecosystems to sustain such adaptations and transformations.

A strong contributing factor in either pathway is technology. Despite early articulations of the importance of built infrastructure in conceptual frameworks for urban systems and its explicit articulation in the Human Ecosystem Concept, technology and ecology have been discussed separately. We argue that urban ecology must move beyond a social–ecological conceptual framing to more explicitly address the social–ecological–technological/infrastructure system (SETS). The urban SETS framing is a systems approach that emphasizes the importance of technology in urban built infrastructure and increasingly new, digital technology in shaping the opportunities for developing greener and more inclusive cities. Planning, designing, and managing urban spaces across multiple scales will require a deeper understanding of how the many interacting components, social, ecological and technological, together create patterns and processes that influence the character and quality of the city. This holds not only for present conditions and how these might be improved but also for navigating upcoming change, both as much needed transformations and in adaptation to a changing world.

This project moves beyond current state of the art thinking about Smart Cities and Nature Based Solutions by developing an explicit understanding of how Social-Ecological, Ecological-Technological and Social-Technological system couplings should be woven together to bring NBS into Smart Cities strategies. The combination of perspectives is critically important for bringing together aspirations for sustainability with strategies for building resilience. 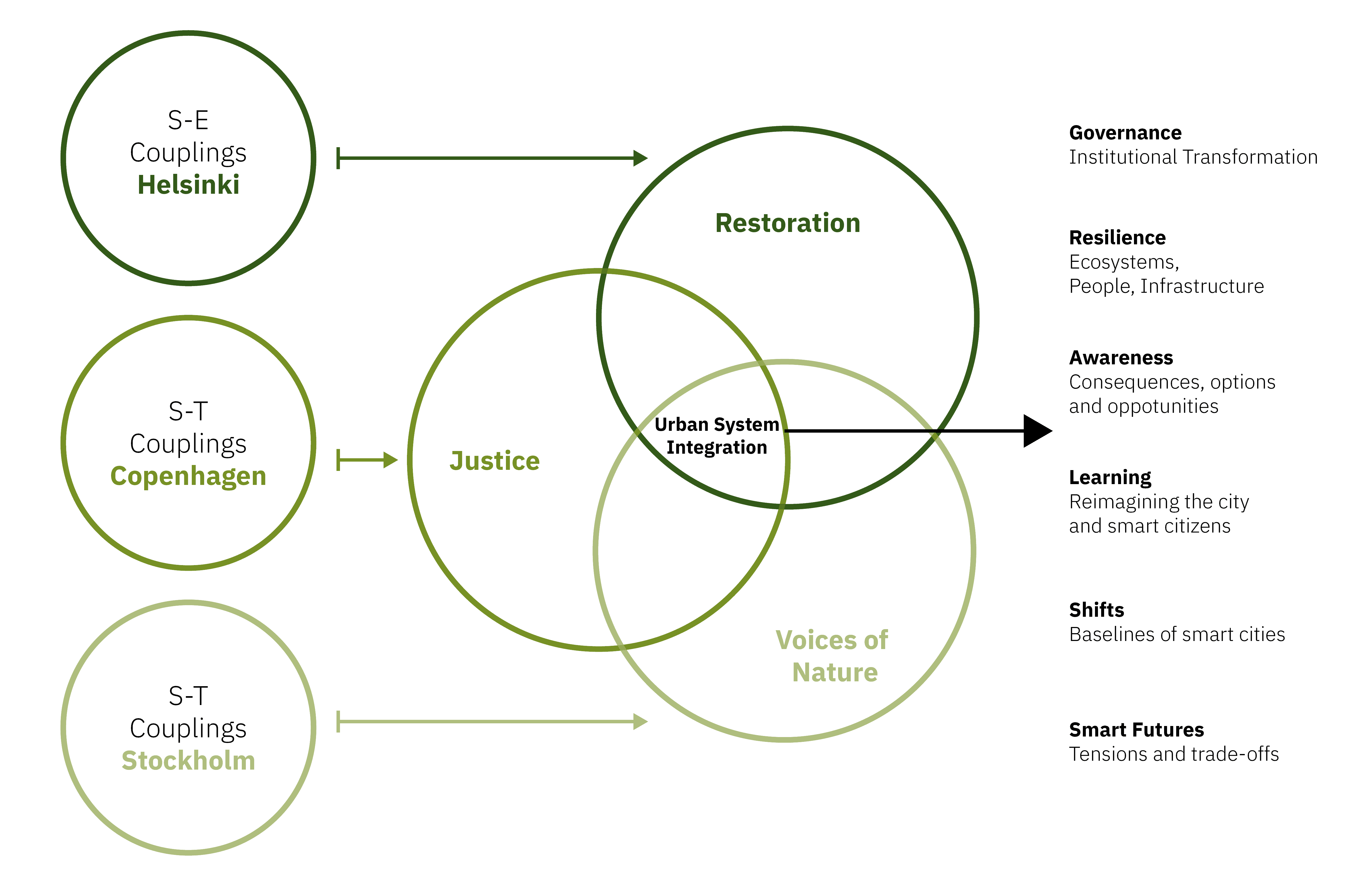